She was born Flossie Thurston in Conway, NH before the turn of the century. First residing in her father’s farmhouse in Eaton, she was named for her uncle’s sulky horse, am honor she found as amusing as any one she would tell. Flossie was a member of the first graduating class of Kennett High School in Conway, NH. She graduated from the Plymouth Normal School (Now Plymouth State College) and became a primary grades teacher, returning to her beloved Mt. Washington Valley the year Charles Lindberg flew to Paris. Flossie made it all the way to Chatham where she taught grades 1-8 in a one rook school house. She then moved on to Bartlett where she taught only first and second grades. During those early summers she waited tables at the Eagle Mountain House in Jackson, eventually teaching in the Jackson Grammar School.

It was Omer Gile who won her heart. They married and settled into a farmhouse on Pinkham Notch Road just beyond the Dana Place in Jackson. They had a couple of cottages they rented as well as running a filling station called “The Last Chance Gas”/ In 1946 Omer, a licensed electrician and general handyman, partnered with Charlie Butcher to build a two tier rope tow at the farm that serviced a slope with almost a thousand foot vertical drop! This was one of the very first in the region.

In the mid-fifties, the Giles purchased the Old Wentworth Store where the Jackson Post Office one was, on the village side of the Jackson Covered Bridge. Flossie served as town clerk for 25 years and Omer became the electrician and handyman at the Wentworth Hall, later to be known as the Wentworth Hotel & Resort.

After Omer died Flossie continued as the town clerk and post mistress. She lived during this time in a house that used to be part of the Wentworth complex called the Blue Spruce Inn. This house was once set aside for staff lodging by the Hotel but was later sold to the Giles. Flossie remained there for 25 years, only moving when she was relocated by family in the late 90’s to the Laconia area. It was there, on April 6, 2005, at the Belknap County Nursing home that Flossie passed on.

This old Jackson homestead is now affectionately named Flossies General Store and Emporium. It commemorates a true Valley legend and a source of many wonderful memories by many who still reside in this quant village in the mountains. 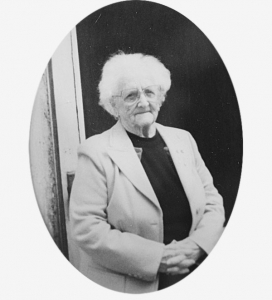